Clopidogrel is one of the most important drugs utilized for secondary prevention of ischemic events in patients with ACS who undergo PCI. Therefore, numerous investigations have been conducted to better understand the pharmacological effects of this agent, as well to define settings associated with greater benefit or harm from its clinical use.

The Role of Cigarette Smoking

Cigarette smoking is a known inducer of CYP1A2 and its activity increases relative to the number of cigarettes smoked per day. Importantly, CYP1A2 is the predominant isoenzyme responsible for the first of the two oxidative steps required for clopidogrel to be metabolized into its active metabolite. This has led to numerous investigations aimed to assess the impact of cigarette smoking on clopidogrel-induced effects (clinical, angiographic and pharmacokinetic/pharmacodynamic).

Post-hoc analyses of pivotal clinical trials comparing dual antiplatelet therapy consisting of aspirin and clopidogrel vs. aspirin alone have reached consistent findings, showing that clopidogrel therapy may be more effective in current smokers compared with nonsmokers. These include the CREDO (Clopidogrel for the Reduction of Events During Observation); CHARISMA (Clopidogrel for High Atherothrombotic Risk and Ischemic Stabilization, Management and Avoidance); and CLARITY-TIMI 28 (Clopidogrel as Adjunctive Reperfusion Therapy-Thrombolysis In Myocardial Infarction 28) trials.

Most recently, an enhanced relative benefit of clopidogrel therapy among smokers was also shown in a post-hoc analysis of the CAPRIE (Clopidogrel Versus Aspirin in Patients at Risk of Ischemic Events) trial, which is the only large-scale head-to-head comparison study of clopidogrel vs. aspirin. Overall, these very consistent clinical outcome data have led to investigations aimed to define if there may be a biological explanation to these enhanced relative benefits of clopidogrel among smokers compared with nonsmokers. 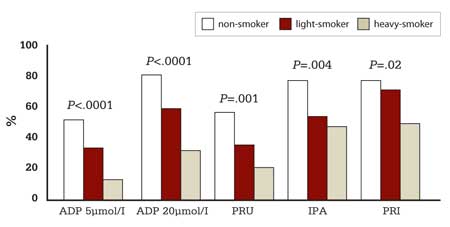 Seminal investigations were able to consistently define a threshold of smoking at least half a pack per day to significantly impact the efficacy of clopidogrel. In particular, clopidogrel therapy in current smokers was associated with increased platelet inhibition and lower aggregation compared with nonsmokers. More recently, a pharmacodynamic study also demonstrated a dose-response effect of smoking on clopidogrel effects in patients with diabetes mellitus, by using a more objective measure to quantify cigarette smoking by assessing serum cotinine levels. In fact, prior investigations were based on self-reported smoking, which is not an objective measure of the amount of nicotine exposure, as it depends on the type and brand of cigarettes and smokers’ habit (eg, deep inhalation). Cotinine is the major stable degradation product of nicotine metabolism. In addition to showing the effects of cotinine levels on the degree of platelet reactivity, a dose-response profile on the prevalence of rates of HPR using cut-off values that have been associated with an increased risk of recurrent ischemic events, including stent thrombosis, was demonstrated showing consistent results using multiple assays (Figure).

The observations from the aforementioned studies highlighting the smoker’s paradox among clopidogrel-treated patients, however, should not assume smoking as being protective for these patients. In fact, although clopidogrel effects are enhanced in smokers compared with nonsmokers, CV event rates, including mortality and bleeding, still remain distinctly higher among smokers. Smoking remains a major risk factor for atherothrombotic CV processes and smoking cessation is a class I recommendation for prevention of ischemic events in patients with vascular disease. Therefore, the ideal health care goal to reduce atherothrombotic risk still remains smoking cessation. However, this objective is not always achieved, and many of our patients with established atherosclerotic disease continue to smoke and remain at increased risk for ischemic recurrences, underscoring the need for optimal antiplatelet protection.

For patients requiring DAPT, the use of more potent antiplatelet treatment regimens, such as prasugrel (Effient, Daiichi Sankyo/Eli Lilly) and ticagrelor (Brilinta, AstraZeneca), may represent a potential option. For patients who do not have a clinical indication to be on DAPT, but rely on a single antiplatelet agent for their antithrombotic protection, it may be hypothesized that aspirin may offer less antithrombotic protection compared with clopidogrel, particularly in smokers. Given the increased density of platelet P2Y12 receptors among smokers, clopidogrel may be a more effective platelet inhibitor for the latter patients and may be considered the treatment of choice. Indeed, further prospective investigations are warranted to better evaluate the impact of cigarette smoking on clopidogrel effects, as well as how this may be influenced by genetic determinants and its impact on other antiplatelet agents. The PARADOX (The Influence of Smoking Status on the Pharmacokinetics and Pharmacodynamics of Prasugrel and Clopidogrel in Aspirin-treated Subjects with Stable Coronary Artery Disease) study is a dedicated prospective trial that will provide further insights into this controversial topic.

Dominick J. Angiolillo, MD, PhD, FACC, FESC, FSCAI, is the director of cardiovascular research and associate professor of medicine at the University of Florida College of Medicine-Jacksonville, and is a member of the Cardiology Today Intervention Editorial Board.