A next-generation device for closure of the left atrial appendage to prevent thrombus embolization in patients with nonvalvular atrial fibrillation met its safety and efficacy goals, according to the results of the PINNACLE FLX study.

“The Watchman device [that] is currently in use was designed over 15 years ago,” Shephal K. Doshi, MD, director of cardiac electrophysiology at Providence Saint John’s Health Center, Pacific Heart Institute, Santa Monica, California, said during a press conference. “Since the design has been essentially frozen for this many years, this next-generation device was designed to see if we could make the implant better, improve performance and safety and try to expand the eligible patient population, in terms of being able to implant more patients with complex anatomy with the new device. The main difference is that the distal end is closed. When the device comes out of the catheter, it comes out as a ball, the theory being that this is less traumatic, less likely to perforate and less likely to cause pericardial effusion. The device also has dual rows of anchors, hopefully rendering it less likely to embolize. There is also less metal exposure, hopefully reducing the chance of device-related thrombus.”

Implantation was successful in 98.8% of patients, and the mean number of devices used was 1.2, Doshi said during the press conference. 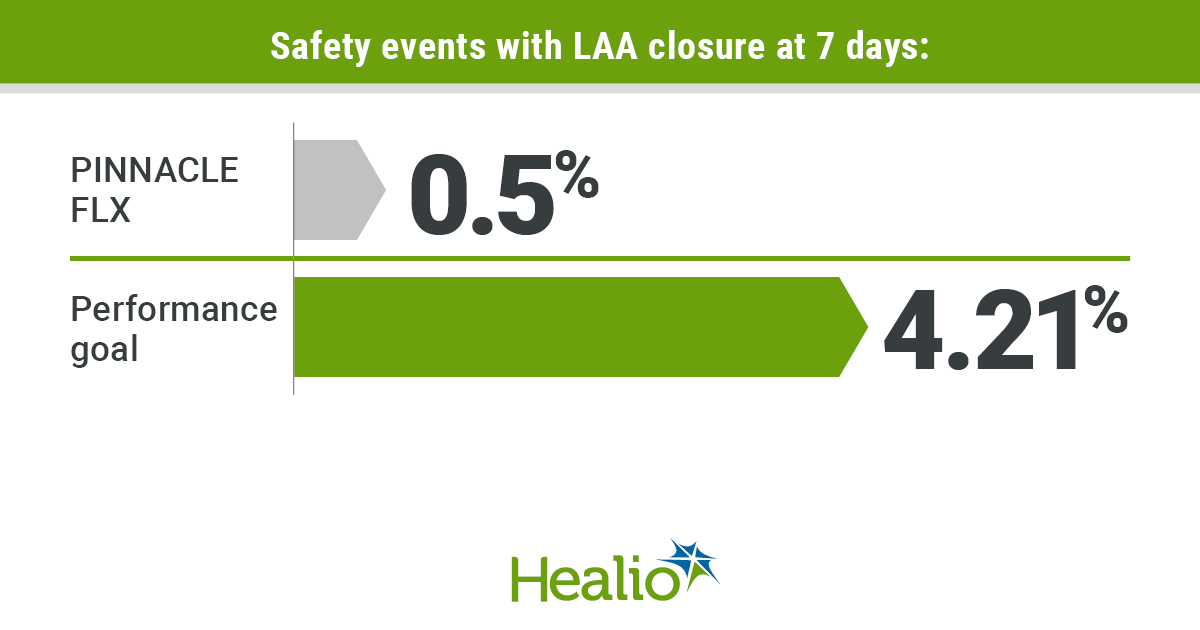 Safety events with LAA closure at 7 days and performance goal of the PINNACLE FLX study.

The rate of effective left atrial appendage (LAA) closure at 12 months, defined as any peri-device flow with jet size 5 mm or less per core laboratory-assessed transesophageal echocardiography, was 100%, beating the performance goal of 97% (P < .0001) based on rates observed in the PREVAIL and CAP2 studies of the original device, he said.

The primary safety endpoint of all-cause death, ischemic stroke, systemic embolism, or device or procedure-related events requiring open cardiac surgery or major endovascular intervention at the later of 7 days or hospital discharge occurred in 0.5% of patients from PINNACLE FLX, beating the performance goal of 4.21% (P < .0001) based on rates observed in PREVAIL and CAP 2. There were two events in the PINNACLE FLX cohort, both ischemic strokes, Doshi said.

At 12 months, 2.6% of patients from PINNACLE FLX had ischemic stroke and none had hemorrhagic stroke, Doshi said during the press conference. In addition, he said, 6.6% of patients died, 4.4% died from CV or unknown causes, 1% had pericardial effusion, 7.9% had major bleeding and none had device embolization.

“We were able to effectively close all appendages, with no patients having a leak more than 5 mm,” Doshi said during the press conference. “Only 0.5% of patients had a safety event within the first 7 days. Follow-up will be ongoing through the 24-month window, when we can look at the secondary endpoint, which is clinical events such as stroke at that time.”

The next-generation device is not yet available for commercial use in the United States. – by Erik Swain

This study demonstrates the safety and efficacy of the re-designed Watchman LAA occlusion device, Watchman FLX. The current Watchman device is the only FDA-approved technology for stroke prevention as an alternative to long-term anticoagulation. Technical modifications on this FLX design are intended to improve fixation while allowing better sealing, and at the same time making the device itself less traumatic to the tissue. The study also adds to a growing body of literature using direct oral anticoagulant agents (DOACs) as an alternative to warfarin for the obligatory periprocedural anticoagulation, which is very important as a large number of currently implanted Watchman devices are utilizing DOACs for this purpose.

Many centers across the United States currently performing Watchman procedures are eager to use the Watchman FLX. While I was not personally involved, our institution participated in the clinical trial evaluation of Watchman FLX, and some of our operators have preliminary experience and familiarity with this device.

What is needed and on its way are studies comparing LAA occlusion to DOAC agents. DOACs have significantly lowered the risk for bleeding compared with warfarin, and so in order to best select candidates for LAA occlusion, we need to weigh the benefits and risks of the contemporary procedural technologies against the contemporary drug therapies. The goal is to select patients for whom the up-front procedural risk, albeit small, can be justified to mitigate the long-term risk for bleeding. This can be challenging given the blistering pace of innovation in relation to the time and resources required to organize and perform randomized clinical trials. But nonetheless, this is the direction for further research.

The study does not directly compare WATCHMAN FLX to its predecessor.  Many centers have gained considerable comfort and experience with the older-generation device with favorable outcomes that are currently being tracked in an FDA mandated postapproval registry. The operational (handling) characteristics of FLX are a little different, and sometimes even well-designed and executed enhancements have the potential to ‘reset’ operator learning curves. With that said, it is equally fair to credit the device manufacturer for having a strong reputation with regard to physician training and rollout of its new technologies, beginning with the most experienced centers participating in the clinical trials.