NEW ORLEANS — Endovascular ultrasound renal denervation resulted in BP reductions that were maintained at 6 months, with fewer prescriptions for antihypertension medications needed, compared with a sham procedure in patients with uncontrolled hypertension, researchers reported at the American College of Cardiology Scientific Session.

Ajay Kirtane, MD, SM, presented 6-month data on 69 patients with uncontrolled combined systolic and diastolic hypertension who were assigned renal denervation with an ultrasound-based device (Paradise, ReCor Medical) and 71 patients assigned a sham procedure. The mean age in both arms was 54 years and most were men.

Despite less intensive therapy, renal denervation lowered daytime ambulatory systolic BP to a greater extent than the sham procedure, according to the researchers. The mean reduction at 6 months was 18.1 mm Hg with renal denervation vs. 15.6 mm Hg with sham control (difference adjusted for baseline Bp and number of medications, 4.3 mm Hg; 95% CI, -7.9 to -0.6; P = .024). 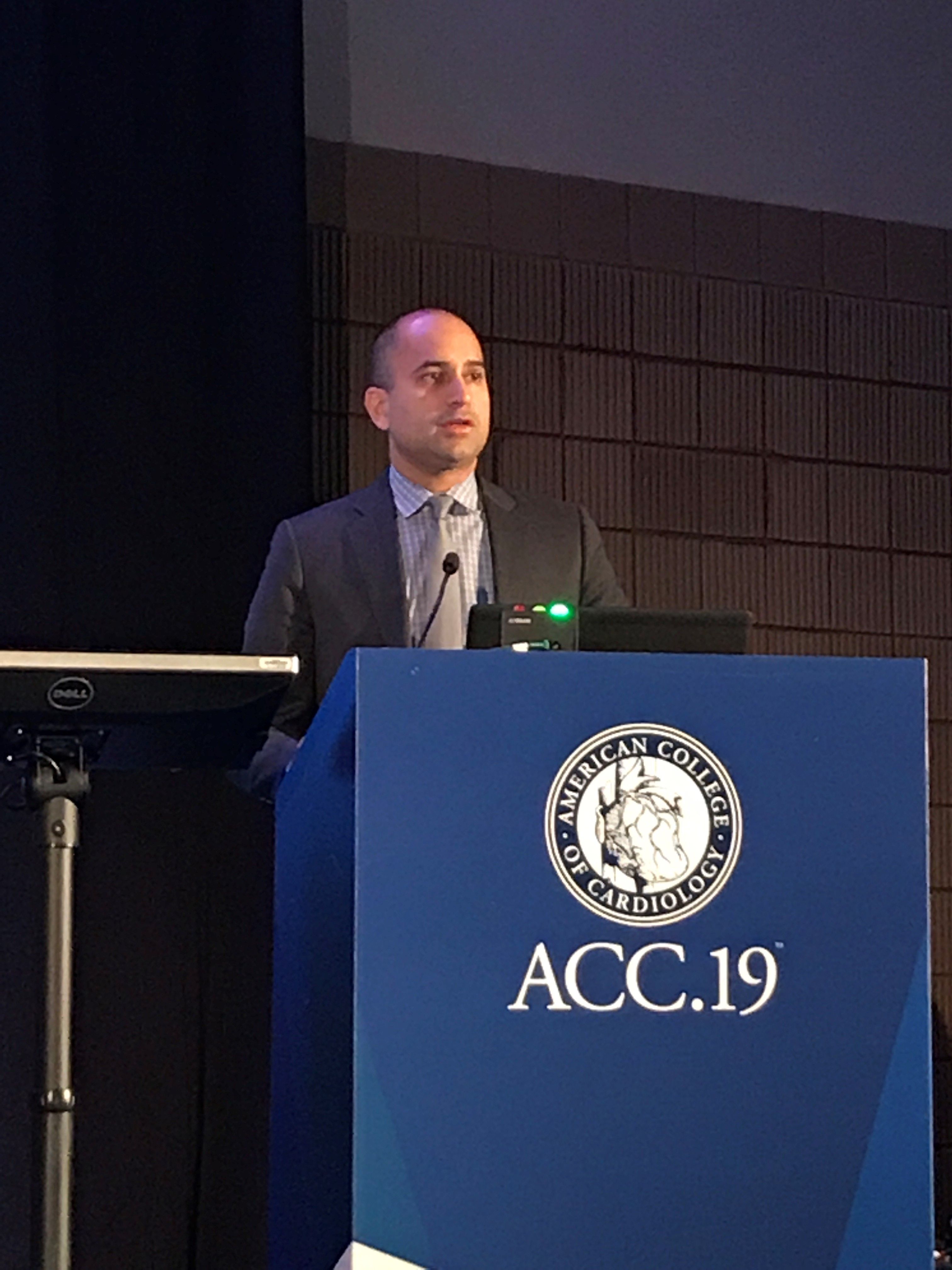 During a presentation at the American College of Cardiology Scientific Session, Ajay Kirtane, MD, SM, presented 6-month data on patients with uncontrolled combined systolic and diastolic hypertension who were assigned renal denervation with an ultrasound-based device.
Source: Darlene Dobkowski

“One can appreciate that these significant drops in blood pressure that combined the additive effect of denervation plus medications are greater compared to medications alone,” Kirtane said during the presentation.

Rates of ambulatory, home and office BP control at 6 months were also greater with renal denervation.

No major adverse events occurred in either group through 6 months, according to the results.

The data were simultaneously published in Circulation.

RADIANCE-HTN SOLO was conducted at 21 centers in the United States and 18 in Europe. The aim was to study the effect of renal denervation in patients with hypertension that had been controlled with one or two antihypertensive medications or uncontrolled with none to two medications, but for the purpose of this trial they were weaned off all medications. Follow-up was performed at 2 months to assess for the primary efficacy endpoint and mean daytime ambulatory BP while off medication. Other follow-up visits were conducted monthly up to 6 months to assess BP control, medication burden and home, office and ambulatory BP. A titrated protocol was initiated at the 2-month visit in both treatment groups to titrate antihypertensive medications if home BP monitoring resulted in an elevated reading.

“[This allowed us] to look at medication burden after patients had been basically reset off of all medications and subjected to the procedure,” Kirtane said during the presentation.

“We feel that if corroborated by additional data from ongoing trials in this [RADIANCE] program, these data do suggest that endovascular ultrasound renal denervation may have a clinical role as an adjunctive therapy or even as alternative to starting or uptitrating antihypertensive medications in patients with uncontrolled systolic and diastolic blood pressure,” Kirtane said. – by Darlene Dobkowski, with additional reporting by Katie Kalvaitis

This really went under the radar because it was presented at the same time as the PARTNER trial and the Evolut (Medtronic) low-risk trial. It is actually fascinating data. It is a small randomized controlled trial against a sham procedure, a level of evidence that we rarely see in CV trials.

The initial endpoint that had been reported was 2-month difference in BP and safety. That actually met their prespecified endpoints.

What happened from 2 months to 6 months is that all these patients were then allowed to be titrated on medications per the discretion of the treating physician, but with their treatment assignment still blinded. Providers did not know whether patients received denervation or if they were in the sham control group. They said, “Their blood pressure is this, I am either fine with what your blood pressure is if it is at pre-established guidelines.” If the patient was hypertensive, they said, “I am going to start you on these medications per a prespecified pathway of titration.”

What the study showed was that patients who had received renal denervation had a better ability to reach treatment guideline goals compared with patients in the sham procedure group.

There were some interesting bar graphs that they had. Comparing the renal denervation vs. the sham procedure group, in the patients who reached goal in both groups, there was a difference in how much medication they needed to get to that goal BP. It seems to be — and this has been suggested from these trials over the last year — that renal denervation is providing an effect that may be equivalent to adding another BP medicine but without having to take that medicine every day and all the issues that go along with compliance.

Medtronic reported some global Symplicity registry data. Given all of these trials, the FDA has greenlighted them for pivotal investigation, so that is something that we are anxiously waiting to see over the next year.

Next will be 12-month data, and some of the larger trials are hoping to finish enrollment this year. If we are lucky, we can see another late-breaking trial in the next 12 months.

Chandan Devireddy, MD, FACC, FSCAI
Cardiology Today Next Gen Innovator
Associate Professor of Medicine
Associate Fellowship Director, Interventional Cardiology
Emory University School of Medicine
Emory University Hospital Midtown
Disclosures: Devireddy reports he is on the data safety monitoring board for Medtronic, works at a participating center for the PARTNER 3 study with the Edwards Lifesciences TAVR device and is an advisory board member for ReCor Medical.
ADD TOPIC TO EMAIL ALERTS
Receive an email when new articles are posted on
Please provide your email address to receive an email when new articles are posted on .
ADDED TO EMAIL ALERTS
You've successfully added to your alerts. You will receive an email when new content is published.