The device (J-Valve TF system) is designed for patients who require TAVR due to aortic regurgitation, according to a press release from the company.

The first U.S. procedure was performed by a team led by Dean J. Kereiakes, MD, FACC, FSCAI, at The Christ Hospital in Cincinnati. Cardiology Today’s Intervention previously reported on the world’s first procedure with the device, performed in Canada.

“The existing TAVR valves were designed specifically to address aortic stenosis,” Kereiakes said in an interview. “Severity of aortic stenosis is directly related to the density of calcification. The ability of a replacement valve to lock onto a heavily calcified annulus and leaflets differs from locking onto a native valve that has little or no calcification. It’s a very different target substrate. When you use the existing TAVR valves for aortic insufficiency, the results are suboptimal. This has been confirmed in the TVT and VIVID registries. There is a greater risk for device migration, device displacement, need for a second device and residual paravalvular regurgitation compared with their use in aortic stenosis. Part of this is because of insufficient anchoring and sealing.”

According to the release, approximately 20% of surgical AVRs are due to aortic regurgitation, but there are no TAVR systems approved for that indication in the U.S.

The product features an anchor mechanism linked to a self-expanding stent frame to attach to the failing native valve, which does not need to be calcified for fixation to take place, the company stated in the release.

“This valve has unique properties, one of which is anchor rings which land in the coronary sinuses,” Kereiakes told Cardiology Today’s Intervention. “Even though the annulus is difficult to see because it is not heavily calcified, you can see when the anchor rings engage it, and then the device aligns itself as the anchor rings steer it into the coronary sinuses. This allows for better orientation of the valve and locks it into the sinuses, even in a native valve that is not calcified. These self-aligning and localizing characteristics are truly remarkable.” 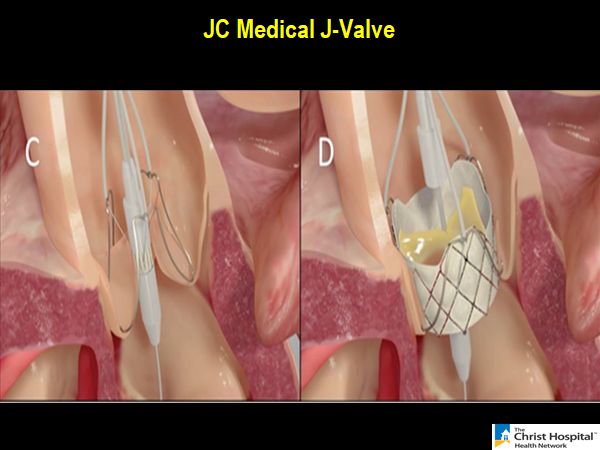 The novel J-Valve TF system (JC Medical), before (left) and after expansion (right), was implanted in a U.S. patient for the first time.
Source: JC Medical and The Christ Hospital Health Network. Printed with permission.

In addition, he said, the device is designed so that the sinuses are not closed off after implantation, “when properly positioned, the frame facing each sinus is significantly lower which allows for better flow characteristics, a lower likelihood of thrombus formation and avoidance of coronary occlusion. These considerations are largely theoretical but very attractive.”

He said the first patient treated with the valve “did great and went home the next day.” Because the patient had tortuous aortic anatomy, the procedure was the first to be performed via subclavian access, but transfemoral access will be feasible for most cases, he noted. “We didn’t think that transfemoral access was going to give us the optimal approach angle with the tortuous aorta and horizontal heart,” he said, noting the device’s flexion capabilities were helpful in aligning the replacement valve with the annulus.

A U.S. clinical trial of the device, which is not yet approved for use in the U.S., is scheduled to launch in 2019, according to the release.

A promising application for the device may be valve-in-valve procedures, Kereiakes said.

“Inadvertent coronary obstruction is a common problem with valve-in-valve cases, and people go to great lengths to avoid it,” he said. “The J-Valve’s anchor rings become claspers and grasp the unstented valve leaflet material and lock down the prior bioprosthetic valve leaflets.” – by Erik Swain