Now, 10-year results of the CREST trial and 1- and 5-year results of the ACT I trial, all recently published in The New England Journal of Medicine and presented at the International Stroke Conference in February, may finally change that, after data demonstrated that carotid artery stenting (CAS) was noninferior to carotid endarterectomy in symptomatic and asymptomatic patients with carotid artery stenosis.

“The findings of CREST and ACT I are quite remarkable and should result in better access for patients to the range of therapies available, ie, endarterectomy and stenting,” Kenneth Rosenfield, MD, MHCDS, FACC, FSCAI, section head for vascular medicine and intervention at Massachusetts General Hospital, principal investigator of ACT I and Cardiology Today’s Intervention Editorial Board member, said in an interview. “These data should result in changes in reimbursement ... that would enable patients in need of revascularization to select which therapies are best for them.” 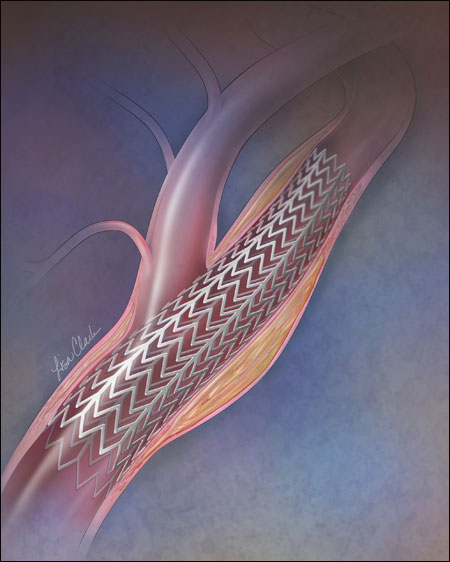 The controversy is not put to bed by any means, however. It is unclear whether or when CMS might decide to expand reimbursement for CAS, and it is also not yet determined whether CAS is preferable to optimal medical therapy, a question that may be answered by the CREST-2 trial, which recently began enrollment.

The rate of the composite primary endpoint was similar between the two groups (see Table).

“The long-term results of 10 years showed that carotid artery surgery and [CAS] were both very safe during the periprocedural period, and equivalent with regard to the primary outcome of stroke, death and MI,” said Thomas G. Brott, MD, principal investigator for CREST and CREST-2 and director for research at Mayo Clinic, Jacksonville, Florida.

Also crucial “was the exceptionally low number of strokes that occurred in both treatment groups between the time of the procedure and out to 10 years,” Brott said.

Brott said one question the CREST trial did not answer is how much of the efficacy of CAS and carotid endarterectomy was related to the procedures or related to the treatment of patients in 2016 compared with a decade ago.

“Changes in the medical care make it tricky to sort out these great results over 10 years,” Brott said.

Michael R. Jaff, DO, FSCAI, medical director of the Fireman Vascular Center at Massachusetts General Hospital, said CREST is “an important landmark trial that received lots of criticism early on by virtually every constituency about how to interpret the primary endpoint. But I think the 10-year data settle the score.”

The ACT I trial was another landmark study showing equivalency between the two procedures, this time exclusively in asymptomatic patients (n = 1,453). According to the results, CAS with embolic protection was noninferior to carotid endarterectomy for the primary endpoint of death, stroke or MI within 30 days. In longer-term analyses, CAS and endarterectomy were associated with similar rates of ipsilateral stroke at 1 year and death and stroke at 5 years (see Table).

“The ACT I trial was a well-designed trial with good operators and impressive results showing the equivalency between [CAS] and surgery,” Mark H. Wholey, MD, MS, staff physician and former chair of the radiology department at the University of Pittsburgh Medicine Center, Shadyside Hospital; adjunct clinical professor of engineering in medicine at Carnegie Mellon University; and Cardiology Today’s Intervention Editorial Board member, said in an interview.

Christopher J. Kwolek, MD, vascular surgeon at Massachusetts General Hospital and chairman of surgery at Newton-Wellesley Hospital, Newton, Massachusetts, said he did not find the results of CREST and ACT 1 surprising.

“The data are very strong,” he said. “The results aren’t necessarily unexpected, but I don’t think that we’re going to dramatically change the way things happen, either in terms of transfemoral stenting or surgical endarterectomy.”

Now that the CREST and ACT I studies have demonstrated durable equivalency between CAS and carotid endarterectomy, experts anticipate whether the findings will lead to wider use of CAS in patients with carotid artery stenosis.

For real-world use of CAS to grow in the United States, CMS will have to amend its coverage decision to restrict reimbursement for it only to patients in registries or those with similar profiles to patients enrolled in the CREST trial, and only if embolic protection is performed.

“The issue, going as far back as the SAPPHIRE trial, was that we had FDA approval, but no CMS approval. This resulted in a major setback in all carotid investigations, especially low-level research, with the absence of any funding and any approval,” Wholey said.

CMS made its initial coverage decision in 2001 “because [it] felt that the data [available] at the time ... [were] only in the patient population that they currently cover — that is, high-risk, symptomatic patients with a high-grade carotid stenosis,” Jaff, a member of the Cardiology Today’s Intervention Editorial Board, said.

L. Nelson Hopkins, MD, FACS, distinguished professor of neurosurgery at State University of New York at Buffalo and president of Gates Vascular Institute, said CMS should reconsider its stance because CAS has become a much safer procedure as the technology has evolved over the years.

“CMS is still unwilling to reimburse for any but the most extreme cases, so many patients who would be better served by [CAS] are denied that option,” he said. “That is the trouble with having regulators making clinical decisions. I understand the concern that they don’t want to unleash an unbridled approach whereby everyone can do stenting on anyone. But there are a lot of patients who would be better served by carotid stenting than carotid surgery. And there are a lot of patients who have equivalent risk with both procedures where, given the newer technology, we feel confident that the risk for stroke is significantly less in [CAS] now than it was at the end of CREST 1, and it is appropriate to use that procedure on a lot of patients that CMS will not reimburse for.”

In late April, results of an analysis of Medicare patients undergoing CAS or endarterectomy by Jessica J. Jalbert, PhD, from Brigham and Women’s Hospital and Harvard Medical School, and colleagues demonstrated that after adjustment for patient and provider factors, mortality risk was similar for the two procedures (see Table).

Experts told Cardiology Today’s Intervention that there are a variety of categories of patients who appear to be well-suited for CAS. The most obvious group is individuals who are candidates for carotid endarterectomy but are too high-risk for surgery, usually because of anatomical or physiological reasons.

He also noted that the CREST and ACT I data show CAS produces good results in young patients with focal lesions, low plaque burden and little calcification. “That’s not a population that had access to stenting before CREST and ACT I, but, now, we believe they should be able to choose stenting.”

This came as a surprise to the CREST investigators, Brott said.

Patients at elevated risk for embolic events have traditionally been considered better candidates for carotid endarterectomy than CAS, but recent data suggest that stenting with “some form of proximal or flow reversal ... can get very close or as good as clamping with endarterectomy,” Kwolek said.

“If [endarterectomy and CAS] are the best treatments, let’s continue forward with those treatments. If, on the other hand, intensive medical management is found to be just as effective [without] the upfront risks of surgery and stenting, then we will be able to advise our patients to take a different route,” Brott said in an interview.

“I am encouraged that we will learn a lot from these two trials and hopeful that the data that come out of these trials won’t further restrict what is the best care for our patients,” Hopkins said.

Some experts, however, expressed concern that the design of the trial may make it difficult for CAS to be proven superior to optimal medical therapy.

Wholey said that, unlike in CREST, which used the same stent and filter in every patient, CREST-2 investigators will be able to use any stent and filter they choose, provided that it has been approved for use in the CREST-2 registry.

“These stents and filters are not all equal. We know that from analytical data,” he said. “My concern is, with all of these [choices], how can there be any uniformity in the data? Secondly, will we have enough information on the filters and stents to be statistically significant?”

Waiting for a Decision

It is possible that the CMS decides to hold off on revising its reimbursement policy for CAS until after the CREST-2 results are reported.

While waiting to revise the policy might encourage more patients to enroll in CREST-2, “if Medicare is interested in providing effective therapies for Medicare-eligible patients, to wait for the results of CREST-2 in order to make the decision seems challenging to me,” Jaff said.

Whatever happens, experts agree that the current practice of stringent requirements for CAS operators and stringent tracking of patients who undergo the procedure should remain.

“It’s still important that operators for these procedures be experienced and careful, and that they be vetted,” Rosenfield said. “Most of the stenting to date has been done in a setting where we are tracking patients in registries and calculating NIH Stroke Scale scores before, after and long term. That’s been a very good thing. If you know you’re being watched, that has an effect on your selection of patients and performance of the procedure.” — by Tracey Romero and Erik Swain