The Doctor and the Dalai Lama

No doubt you’ve read about the doctors who care for sports teams, famous athletes, Hollywood actors, rock stars, opera singers, foreign royalty, or the President of the United States. In all these instances, the physicians probably find their work rewarding, and have great experiences and stories to tell (provided they don’t violate patient confidentiality, of course).

But one doctor got a lot more than he bargained for when he took on a famous patient. American physician Barry Michael Kerzin, MD, had his own life transformed as a result of a professional trip to Dharamsala, India in 1988, which culminated in Dr. Kerzin deciding to stay and practice medicine there for the local people, as well as for the Dalai Lama and other Tibetan lamas. (At the time he was an assistant professor of family medicine at the University of Washington School of Medicine.) Already interested in Buddhist philosophy, he began studying Buddhism and meditation more intensively, and in the mid-2000s, 19 years after moving to India, was ordained a Buddhist monk by the Dalai Lama. 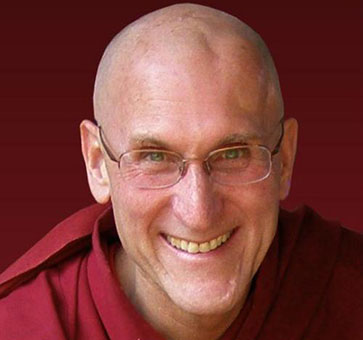 Dr. Kerzin, 68, attended the University of California at Berkeley, then received his medical degree from the University of Southern California. He maintains his board certification with the American Board of Family Medicine. Dr. Kerzin also partiipates in neuroscience research into the effects of meditation on the brain. In addition to tending to his famous patient, he travels the world teaching about how modern medicine and Buddhist philosophy can co-exist. In particular, he advocates for more compassion and altruism in medicine, and to that end founded the Human Values Institute in Japan and the Altruism in Medicine Institute in the United States.

Recently, National Public Radio interviewed Dr. Kerzin about his views on the importance of compassion and empathy in medical training. “He [the Dalai Lama] always encouraged me to keep my credentials and to continue practicing medicine,” says Dr. Kerzin. “Don’t just do the wisdom. Also do the love and the compassion. In fact, do them 50/50. Those were his words.” Dr. Kerzin used to say he wore two hats, the medical hat and the Buddhist hat. But he doesn't say that any more. Today he says he wears one hat: scientist monk.

For more of Dr. Kerzin’s words, and the Dalai Lama's, listen to the NPR broadcast—or read the transcript—here.